Since 2002 Air Tindi has formally worked in partnership with the Tlicho people to service the aviation needs of their region jointly – informally this relationship began when Air Tindi first took flight. The partnership includes the 52% majority owner Tlicho Investment Corporation and the minority partner Air Tindi, which conducts all flight operations for the partnership. 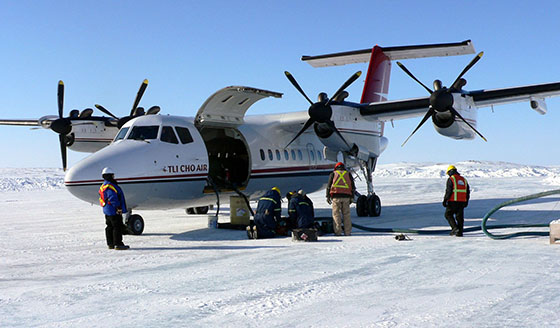 This partnership began before the signing of the comprehensive Tlicho Land Claims and Self Government Agreement, an historic deal negotiated with Canada and the first of its kind in the country. The Agreement cedes control over land access, resources development and self-government to the Tlicho people within their traditional territory.

As such Tli Cho Air is uniquely positioned to meet the fixed-wing charter needs of companies and public organizations involved in infrastructure planning and development as well as mineral exploration and mining on the traditional lands of the Tlicho. Its leadership includes Tlicho citizens from Behchoko, Whati, Gameti and Wekweeti as well as representatives of Air Tindi.

Tli Cho Air is proud to list global mining giants like Rio Tinto, BHP Billiton and De Beers among its key clients along with other Northern customers such as Aboriginal Engineering, the NWT Power Corp., and the Tlicho Government. Scheduled service flights to Whati, Gameti and Wekweeti are also conducted in partnership with Tli Cho Air and directly benefit the residents of the communities which they serve.

In December 2011, Tli Cho Air took the next step in its evolution by purchasing its own de Havilland Dash 7 Combi aircraft, registration C-FWZV. This aircraft, ideally suited for servicing the Tlicho communities and remote Northern resource exploration and mining properties in the NWT and Nunavut, is integrated into the fleet at Air Tindi.

In 2012, Tli Cho Air’s success was recognized by the territorial business community which the presentation of the NWT Chamber of Commerce Business of the Year Award.